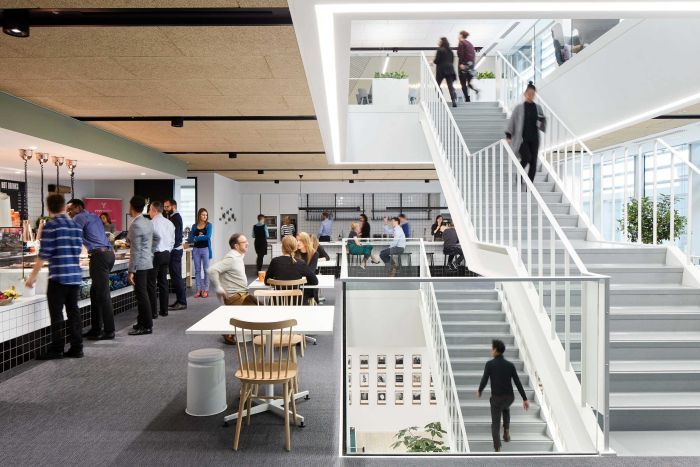 More deaf people are gaining higher education degrees and are working in higher education institutions (HEIs) around the world now than ever before. Much previous research has focused on the need for sign language interpreters or other language access requirements. However, little research has been conducted on how deaf people’s physical environment impacts on their experience of work. This post outlines some research conducted with deaf academics in the UK, exploring their experience of the physical environment.

It is important to note that this research is not only relevant to academics, but also to any deaf person who is working in a largely hearing institution. My research was conducted using walking interviews, and results are split into three main sections: accessibility of existing institutional spaces, problems caused by the design of the institution, and producing deaf spaces. In the following, I will look at each of these in turn.

Interviews with deaf people should make use of the visual modality of sign, but also explore deaf people’s visual experience of the world. Walking interviews are a perfect example of a method that does this. These interviews were conducted while moving through the HEI in which the research participant worked, with them acting as a guide showing me the places they frequented, the places they avoided, explaining how they felt about different areas in their HEI and recounting any particular anecdotes connected to a specific location.

To record these interviews, I used a small, handheld camcorder held close to my chest so that I could move and frame shots without having to look at the screen of the camcorder. This was advantageous because it meant that I could maintain eye contact with the research participant while asking questions and still be able to pan around to capture our surroundings without breaking the flow of the interview. I considered using Go Pros strapped on my chest, but thought that the risk of accidentally blocking the shot was too high. A hand-held camera gave me the advantage of being unobtrusive but also afforded the option of moving independently of my body when needed.

Data recorded in this way was extremely rich. Not only was the interview data recorded in BSL, but the environment in which the interviews took place was also recorded on tape. How we moved through space was captured, giving an important insight into how we adapted our movement and signing to different physical environments. The particular rooms or places which triggered emotional responses or particular memories were also captured on the video, which gave me much deeper understanding of the participant’s narratives when I watched them back. Unfortunately, I was not able to record my questions to the participants, but I requested that they repeat my question back to me at the start of their reply. While this interrupted the flow of the interaction somewhat, it was the best way I could think of to record my questions.

Many of the spaces in which deaf academics worked were not optimal from the point of view of accessibility. In many cases the video shows us walking down corridors one behind the other, not communicating, because there was no room to walk side by side and sign at the same time. In some cases when we attempted this, one or both of us had to intervene to prevent the other from walking into some obstacle. More often when inside we had to find a comfortable space out of the way, then stop and chat. Conversations outside were much less restricted by the space available, so it was clear that the buildings in which these deaf people worked isolated them on this level by preventing them from communicating in particular parts of the building.

Several participants pointed out that they worked in offices or teaching rooms in which there were no flashing lights for fire alarms or doorbells. Some had agitated for the provision of these safety features for several years before they were provided. A sense of dark humour prevailed when talking about this, with participants questioning the value their HEI placed on their lives, and joking that they could burn to death in work without knowing it.

Design of the institution

Many participants felt that the actual design of the buildings in which they worked created barriers for their involvement in the workplace. One example was the lack of windows in office doors. Without a window, a closed door becomes an impermeable barrier to deaf people, because there is no way of knowing if someone is behind the door or not. This not only prevented deaf people from knowing what was going on outside their own offices, but also prevented them from feeling they could visit colleagues as they were never sure if they were in or not.

Institutional design didn’t just cover physical places and buildings, but also the expected behaviours of individuals within the space. Deaf participants reported that they weren’t sure of the etiquette required in different contexts in the university, such as who was allowed in the staff room, or what hearing colleagues felt about noisy interruptions. This caused them to feel some insecurity in their sense of belonging in the workplace.

All of the research participants were able to show me or tell me how they were able to make changes, small or large, to their office environment to mark out deaf space. Some of these were very obvious, such as having a Sign Union flag in their office, or having posters, white gloves and other signs of their political and cultural values on display. Others were less obvious, such as setting up rooms to have clear lines of sight and sufficient room for signed discourse, appropriate backdrops for recording signed videos, and moving furniture around to ensure they did not have their backs to the door.

They also talked about how they were able to subvert the expectations of the HEI about academic/pedagogic behaviour in order to mark out deaf space. This not only included moving furniture around in teaching rooms to make them more visually oriented, but also purposefully using sign in public areas around the campus and putting research posters of their work up in public spaces to ensure that they were visible to the university at large.

All of these changes, small and large, added up to producing identifiable deaf spaces which made the participants feel more ‘at home’ and that they belonged in their HEI.

Firstly, video recorded walking interviews were a huge advantage in this project. While there are some concerns about for example, confidentiality when using this method, with careful use it can result in extremely rich data.

Deaf academics felt that they were excluded from full inclusion in their workplace in several ways through their physical environment. While this has received little attention in the past, this paper shows that the physical environment of the workplace can have a significant impact on the feeling of belonging or otherwise of employees.

Dai O’Brien is a Senior Lecturer in BSL and Deaf Studies in York St John University, York. He is interested in using creative, visual research methods to explore deaf people’s experiences of space and place. When not working, he enjoys running and yoga. He’s on Twitter as @DrDaiJestive