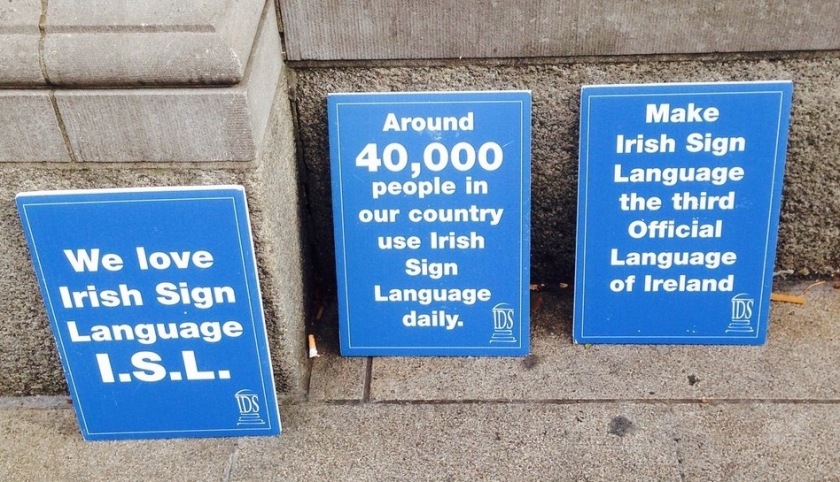 The quote in the title, which is a translation from Irish Sign Language, is often said to me and other men by deaf women, when we inattentively use a ‘feminised’ sign during a conversation. This is an expression of a sign language ideology. In this blog, I examine the sign language ideologies behind the campaign for recognition of Irish Sign Language (ISL) in Ireland between 1981 and 2016. Irish Deaf Society (IDS), the national deaf-led organisation representing deaf people, managed the campaign.

Before the Irish Sign Language Act 2017 was enacted, there were many stages of lobbying/discussion within the campaign towards the achievement of ISL recognition. I examine the campaign through different language ideologies at selected moments on the timeline.

This blog narrates along with a chronological approach. While this timeline is not precise, it does capture important moments and how they affected ISL language ideologies.

Before the 1980s, two significant events impacted on language ideologies. The first event was the implementation of oralism in Catholic schools in the 1940s and 1950s (Protestant-run schools in Ireland implemented oralism as early as 1882). The second one was the emergence of gendered variations of ISL, which was due to decades of gender segregation in the Catholic schools for deaf children. Additionally, there were internal segregations within the schools that created an internalised belief among generations of deaf children that the ability to hear and speak well was the primary target (Conama 2010).

LeMaster (2003) noted from her work that older deaf people remembered their school days (before 1950s) as being ‘fully accessible’ and that hearing people working in these schools were duty-bound to sign at all times (LeMaster did not specify which code or language those hearing staff members were obliged to use). In such an environment, as LeMaster argues, the concept of disability was seen as less noticeable because older deaf people were perceived to grow up in more accessible environments and as a result were less inclined to be activists.

Therefore, older people educated at this time did not adopt an active involvement in ISL recognition or seek significant civil rights outside education. It is noticeable that the ISL recognition campaign was led by deaf people who had experienced the impact of oralism during their school years.

During the early 1980s the older generation of deaf people was worried about the idea that younger deaf people did not acquire the ‘correct’ version of ISL. Therefore, older community leaders took a keen interest in standardising ISL. Apart from the odd letters to newspapers and school magazines, as mentioned above, the older generation did not see the oralist philosophy as one of the issues, at least officially. While the issue might be infrequently an informal qualm among this generation, it rarely became a subject for in-depth research, and it is possible to point out that deference to the authorities was the order of the day.

Consequently, the emergence of ‘different’ signs for different genders led to calls to standardise ISL to ensure that it would be understandable for everyone. LeMaster & Foran (1986) reported that a committee was established to identify and select which gendered sign would suit each English word. They said that it was mostly ‘male’ gendered signs that were chosen over female signs but did not explain why this was the case. It is possible that the patriarchy had an impact on the preference for ‘male’ signs.  They also reported that the committee ended up inventing signs if there were no already existing signs for a particular English word. It testified to common underlying assumptions that signed languages were derived from spoken languages and the absence of understanding that languages can evolve independently from each other.

In 1988, after a training workshop on linguistics in Cork, Teresa Lynch and Helena Saunders (then directors of IDS), at one of the IDS conferences, took the step of naming the Irish deaf community’s ‘natural sign language’ ‘Irish Sign Language’. Even so, this initiative was not entirely accepted because of a dominant belief among community members, especially the older generation, that signed English was a proper language (Lynch: personal communication, 2017).

Afterwards, ISL became a touchy issue for the deaf community and educators of deaf people. Nevertheless, a trend towards a slow acceptance of ISL as a language in its own right gained momentum from the late 1980s and throughout the 1990s. But it was not without tension. For instance, during this period there were several on-going discussions on how ISL should be shaped or how it should look, and bilingualism was often mooted as the solution to the educational issues facing deaf children.

In the 2000s the campaign for ISL gained momentum. For example, in 2001 the Centre for Deaf Studies in Trinity College Dublin was established, made possible by state funding, to focus on ISL linguistics and training ISL interpreters. Also, state funding was being made available for translation into ISL for several public information websites, and interpreters began to make frequent appearances at public places.

While confidence was building regarding the status of ISL, the IDS made the submission to the then Taoiseach (Prime Minister), in 2003, asking for official legal recognition for ISL. A formal submission was dismissed, as the Prime Minister did not think it was feasible enough to warrant serious focus. There was disappointment at the reaction, with the hopes for ISL recognition becoming somewhat subdued, and a feeling that the attempt had been a waste of time.

In 2011, there were two significant developments for the campaign: the national census and a general election. The census had a question about language usage at home. The IDS decided to ask its members and non-members alike, to put down ‘Irish Sign Language’ for this particular question. However, the outcome was unexpected. The number of people counted in the census who mentioned using ISL was put at just 3,502 – with a slight majority of users who were in fact, not deaf (Census 2013) (Respondents were asked if they have “deafness or severely hearing impairment” on the same census. The reaction by the deaf community to this was a general kind of disappointment. There was a general agreement that the number of persons using ISL were severely underreported in the census. Incidentally, the most recent Census in 2016 reported a total of 4,944 ISL users, increasing by 30% from the last census and demonstrating clearly that the reliability of this kind of data can be questionable.

In January 2014, there was a two-hour debate in Seanad Éireann (the Senate) on the ISL Bill. The government, by a margin of three votes out of the total votes of 60, rejected it. This episode left a massive impact on the deaf community, which felt very let down by this rejection. The media reported on this negative impact.

However, an unexpected benefit came from this rebuff. The defeat sparked more interest in the campaign among the deaf community, with most deaf people mentioning how personal the dismissal was for them. Such a successful mobilisation inspired further confidence in the ISL campaign and resulted in the enactment of the Irish Language Act 2017.

One can see the historical impacts on the ideologies behind the campaign: oralism and gendered variations. Oralism had created two general viewpoints within the community: firstly, an older generation tended to believe in the decline of ‘proper signing’ among young people and secondly, the determination of young people to get involved in language activism to address the shortcomings of oralism. Back in the 1980s, the community leadership’s concerns over a reduction in the use and popularity of signed English were real, as they believed such a disregard could worsen the written language literacy among younger deaf people. Judging by the generational profile behind the leadership striving for the recognition of ISL, these leaders had experienced the effects of oralism. Patriarchal influences had a dominant impact on the choice of ‘proper’ signs for each English word, reinforcing a belief that ‘male’ signs were ‘genuine’.

There was no dominant language ideology in the community, but the different ideologies led to different views on how ISL should be utilised. However, there were a few attempts by certain groups to influence ISL, such as certain attitudes towards gender variations and the question of standardising ISL. Still, these never gained enough of a foothold to effectively impose widespread beliefs in the community. The unifying factor within the community came unexpectedly from the rejection of the original ISL Bill by the government.

As for the levels of awareness, it is clear that the Irish deaf community did not have the benefit of accessing international academic studies into linguistics and language policies. Their understanding of languages was informed by their own lived experiences and influenced by their societal contexts. Despite Ireland’s official assertion of being a bilingual nation, monolingualism was openly dominant, and any severe in-depth discussion about language policies was often confined to the survival and preservation of the Irish (Gaeilge) language.  As well, outside of small pockets of language activists, monolingualism was rarely problematised. It is inevitable for this type of attitude to condition many in the deaf community, as illustrated by their preference for ‘male’ signs over ‘female’ sign and their demand that signed English should be a standard language. Moreover, the use of the English alphabetical letter as the initial handshape for many signs became commonplace.

The growing number of deaf children in regular education with much-reduced access to deaf signing adults and children, as well as the increased number of children receiving cochlear implants and not learning ISL, means that the future directions of ISL are not clear and could not possibly be predicted.

While various language ideologies exist, there is one strong ideology in place within the deaf community: the preference for the male variety of ISL. However, just because this ideology dominates now does not mean it will continue to be as dominant in the future. It is also important to recognise that there is a recent and ongoing campaign to revive ‘female’ signs and re-incorporate them into the conventional Irish Sign Language. There are strong links between language ideologies and an individual’s cultural beliefs, identity and economic circumstances. Thus, language ideologies are changing over time, and it will be interesting to see how these ideologies will impact on the beliefs of all key players of the long-sought-after state recognition of Irish Sign Language.

John Bosco Conama is the Director of the Centre for Deaf Studies in Trinity College, University of Dublin. He earned his doctorate in 2010. He is the Board Director of the Irish Deaf Society. His recent publications have focused on deaf people in society, especially focusing on language rights and equality. He was awarded as one of the European Label Language Ambassadors for 2015. John Bosco currently sits on the Disability Advisory Committee under the aegis of the Irish Human Rights and Equality Commission. He’s on Twitter as @jconama_bosco66